You are here: Home / Geneva / Geneva

The target of the Geneva pilot is to integrate autonomous vehicles in the existing public transport services.

TPG has hot-started the work of the AVENUE project by directly integrating an operation of autonomous bus service in the Meyrin area. The current service is provided with a very low frequency (every half hour) and a low speed (max 25 km/h), operating however in an uncontrolled environment (in contrast with many other pilots around the world), with roads shared by other vehicles, bicycles, pedestrians, etc. In 2019, we will start the expansion of the existing service to cover a larger area, with higher bus frequency.

A prime candidate for the expansion is the new under development eco-neighbour of Vergers (https://www.lesvergers-meyrin.ch/ecoquartier/), with 1,350 new residencies to be delivered in 2018/19. Another candidate is the hospital site of Belle-Idée.

After deploying a denser network of autonomous vehicles (3 or 4) and covering the new area(s) by the start of the 2nd year of the project, we will proceed to increase the vehicle speeds in order to reach 40–45 km/h, with safety as prime concern, and incrementally propose new services and routes.

The Geneva Canton, composed of 45 municipalities and with a population of 500.000, is one of the most densely populated areas of Switzerland. In the last 40 years, the Geneva canton population increased by almost 50%, passing from 340.000 (mid 70s) to 500.000 (today). The biggest part of the population increase was absorbed by the suburban communities. As a result, the population of many rural areas has more than doubled in the last 40 years, with an explosion of private car commuting. Geneva is also a major regional economic centre, and each day more than 100.000 persons enter the canton to work. The Geneva Public Transport network, named UNIRESO, is an interconnected system of trams, buses, trolleys (TPG), mouettes (transport boats) and trains (CFF). The whole system is fully integrated and uses the same tickets as well as coordinated time-tables. The public transport in the Geneva Canton represents the most common model of public transport, based on a backbone of surface tramways and a network of buses and trolleys. It is composed of 33 km of tramways, 30 km of trolleybus and 360 km of buses (200 km urban and 160 km suburban).

From the start of the project, between 2 and 4 vehicles will be running on the site, on a network of routes with around 10–35 stops.

The picture below provides a first idea of possible routes at the Belle-Idée site. 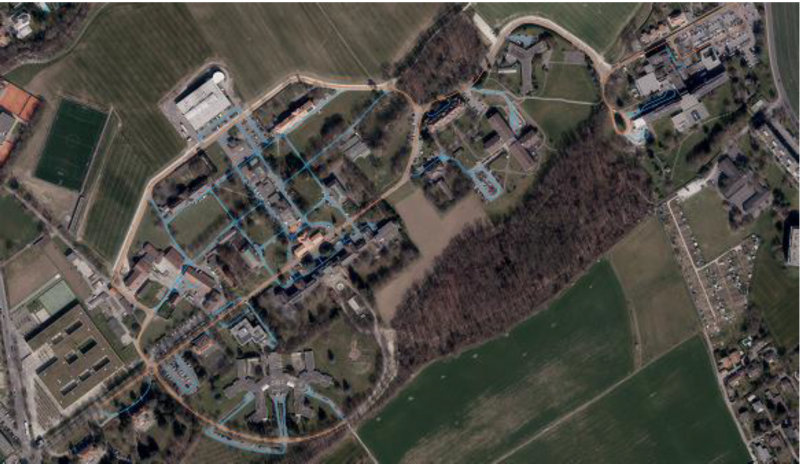