You are here: Home / Summary

What is AVENUE Project?

AVENUE aims to design and carry out full-scale demonstrations of urban transport automation by deploying, for the first time worldwide, fleets of autonomous minibuses in low to medium demand areas of 4 European demonstrator cities (Geneva, Lyon, Copenhagen and Luxembourg) and later on of 3 replicator cities. AVENUE revisits the offered public transportation services, starting from the original problem, which is to allow passengers to move from one place to another. It takes into account their special needs and time constraints, instead of trying to accommodate autonomous vehicles to the existing solutions of prescheduled bus itineraries.

Vehicle services that substantially enhance the passenger experience as well as the overall quality and value of the service will be introduced, also targeting elderly people, people with disabilities and vulnerable users. Road behaviour, security of the autonomous vehicles and passengers’ safety are central points of the AVENUE project.

On the one hand, we have what we call the “traditional models”, where one or more public or private organisations provide all public transport in the region using buses or tramways (metro or similar) and where their strategy is to improve the services via the improvement of the buses and tramways.

On the other hand, in many cities, more disruptive models are developed, in which all possible means of transport, ranging from buses and tramways to bicycles and shared ride services, are used under one common model and various services are proposed for its support under what is called “Mobility Cloud”.

In all the mentioned mobility models, it is recognized that the use and integration of autonomous shared vehicles have the potential to drastically improve the services and provide solutions to many of the problems faced today in the development of sustainable and efficient public transport.

The ultimate goal of the AVENUE project is to demonstrate the suitability and efficiency of the use of small and medium autonomous vehicles (AV) for different transport models that are under development in Europe.

In AVENUE’s vision of the future public transportation in urban and suburban environments, autonomous vehicles will ensure a safe, rapid, economic, ecological and personalised transport of passengers, minimizing vehicle changes, picking them at their doorstep and depositing them as close as possible to their destination.

AVENUE will integrate, adapt, develop and validate innovative transport vehicle services for passengers, maximising the personalisation and optimization of itineraries, and making travelling a real experience for its passengers.

The most common criticisms of public transport concern the low speed and flexibility compared to private cars, the high transport fees and the reliability and availability of the service. In today’s era, where the user empowerment, personalisation and continuous connection to mobile services are becoming the dominant trend, public transport services have very limited options to answer the constantly increasing passenger needs (service personalisation, health issues, handicaps, etc.).

Although different on-line services providing information and trip planning based on the fixed time tables and itineraries are available, they cannot provide the asked service personalisation. Similarly, in-vehicle services are limited to publicity distribution, next bus stops and service disruption announcements. The passengers end up being satisfied by the simple preservation of the existing service quality, since no major improvement can be foreseen.

Autonomous Vehicles – towards a disruption for public transport

Autonomous vehicles will provide the next revolution in urban and suburban transport. The major companies advertise the autonomous cars as the ideal solution for business and family travelling. However, autonomous vehicle transport will have an even higher impact and provide more services when used in the frame of public transportation.

The use of autonomous vehicles for public transport requires the development of new service models that will transform the “simple” ride into a user experience, taking into account the diversity of passenger needs, offering personalised services and covering areas that are not economically accessible today.

Although autonomous public transport vehicles are under pilot testing in many cities around the world, the major barrier for their large-scale adoption is that the transport operators, public authorities and passengers are not yet fully convinced of the safety (road behaviour) of the autonomous vehicles. In consequence, different regulatory restrictions cannot be waived to allow the full exploitation of the autonomous vehicle potential.

Many questions remain unanswered, relating to solid evidence of the vehicle secure operation in today’s complex urban streets, where they will co-exist and share the roads with driver vehicles, pedestrians, bicycles, etc. for many years to come. The large-scale deployment of autonomous vehicles, combined with on-line services, user profiling and dynamic itinerary optimization, will have a snow-ball disruption effect on today’s public transport model.

The drivers’ disappearance will allow transport operators to deploy more vehicles, which will lead to reduction of vehicles’ size, which in turn will allow vehicles to divert from the predefined itineraries and start offering door-to-door services (based on on-line dynamic reservations and optimization). This will lead to transit service personalisation and the introduction of new personalised, user-oriented services, improving the user experience, and in consequence increasing the acceptance and use of public transport services. Furthermore, many cities have started proposing, or considering, alternative means of public transport combining all possible and available transport means, from fleets of autonomous vehicles to public transport, shared ride services, (electric) bicycles, etc., providing the right means and combination of transport for the specific trip. This is known as the Mobility Cloud. The integration of autonomous vehicles will boost the concept and allow a far better approach of public transport in urban and suburban environments. 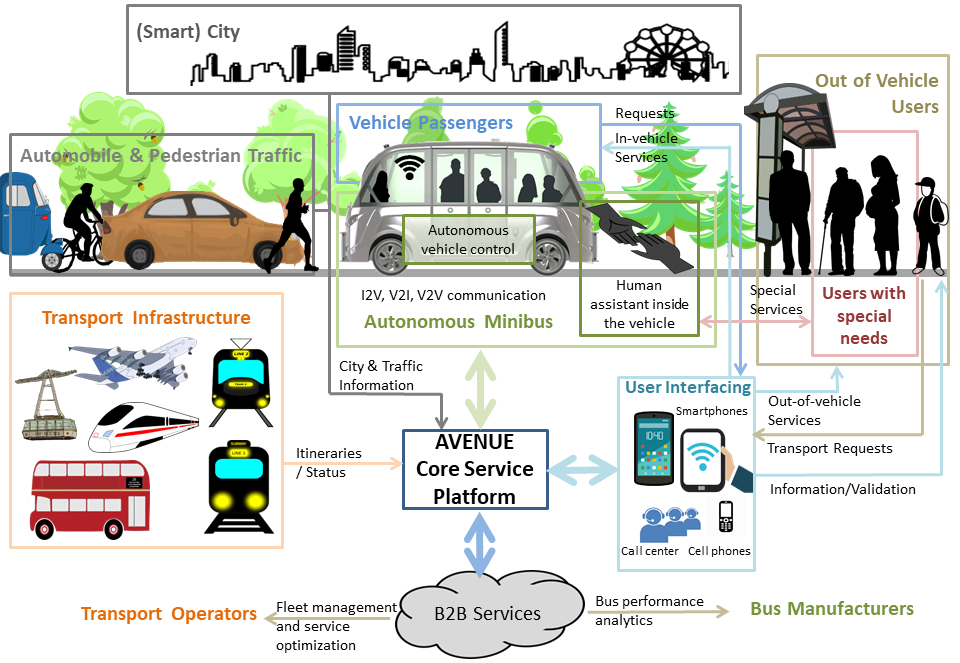 AVENUE draws and builds upon the accumulated experience from its consortium of 16 partners from 7 European countries, and the operation of Navya’s 65 minibuses running in 22 cities of 13 countries, in 4 continents, that already demonstrated reliable and safe operation at pilot sites by transporting over 180,000 passengers. The project activities are organised in 10 work packages that are implemented for 4 years.

AVENUE is organised around 4 use cases of autonomous vehicles for public transportation, which represent the “large-scale demonstrators” of the project (Geneva [Switzerland], Lyon [France], Copenhagen [Denmark] and Luxembourg [Luxembourg]).

AVENUE Webminar Series : Service to monitor the Inside of AV Shuttle

A critical issue in the deployment of AVs in public transportation with no in-vehicle operator (or Safety Driver), is how to ensure the safety of the passengers, in case of

A critical issue in the deployment of AVs in public transportation with no in-vehicle operator (or Safety Driver), is how to ensure the safety of the passengers, in case of in-vehicle incidents. A technology was developed and tested in several sites of the AVENUE project and is presented in the Webninar, organised by AMobility (HOLO) and CERTH.

A public transportation must be first of all what its names defines: public!! that is accessible to all citizens. In this webinar we present the challenges and solutions adopted and

A public transportation must be first of all what its names defines: public!! that is accessible to all citizens. In this webinar we present the challenges and solutions adopted and validated in the AVENUE sites for making Autonomous vehicles accessible to Persons with Reduced Mobility (PRMs).

Autonomous Vehicles is just one element contributing to the solution for efficient urban mobility. Based on the experience of deployment of Autonomous vehicles in the 8 site sin Europe and

Autonomous Vehicles is just one element contributing to the solution for efficient urban mobility. Based on the experience of deployment of Autonomous vehicles in the 8 site sin Europe and extensive user feedback, we present in the webinar how AVs can be integrated in the global MaaS, under a sustainable deployment model.

After 4.5 years, the AVENUE project comes to an end! During these years, and in spite the COVID crisis, we were able to fulfill the targets defined in the beginning

After 4.5 years, the AVENUE project comes to an end! During these years, and in spite the COVID crisis, we were able to fulfill the targets defined in the beginning of the project.

We deployed and offered public transportation services in 8 European sites, we raised awareness of the advantages of AVs to the larger public, developed guidelines and recommendations for the different actors, improved the operation of the AVs, in reply to the real needs of public transportation operators ans passengers, etc etc etc …

In this final event, taking place in Lyon at the Parc OL site, we will present the project work and achievements, including a live demo of a functional public transportation service.