The first autonomous vehicles in the grand duchy will be operational next week when two Sales-Lentz shuttles start in Contern.

The date was chosen to coincide with European Mobility Week, seven days in which communes mobilise to raise awareness about sustainable transport methods.

The autonomous Navya shuttle buses will be tested in Contern on Wednesday, according to L’Essentiel, which reported that Contern was selected along with Lyon, Copenhagen and Geneva as part of the European pilot project.

The buses were first presented on Automotive Day at the Goodyear test circuit on 7 June when Sales-Lentzsaid they would be operated on behalf of the commune. When fully operational, they will ferry passengers over a 3.5 kilometre route between the Contern business park and train station.

The buses, which are equipped with 15 seats and have space for 4 standing passengers, can reach maximum speeds of 45km/h with up to nine hours’ autonomy. They have neither pedals nor steering wheels and require no driver for the journey. However, Sales-Lentz said in June they would require an “escort” on board to inform passengers and intervene in the event of a technical problem.

“The human factor will therefore not disappear so soon, but the skills of the traditional driver will only be extended to meet the technological needs of these machines,” Sales-Lentz wrote on its website following the event.

It added that the buses will “meet a need that is not currently covered due to the lack of transport on the section in question.”

It was back in June when Luxembourg bus company Sales-Lentz announced it was going to launch the first driverless bus service in the Grand Duchy. 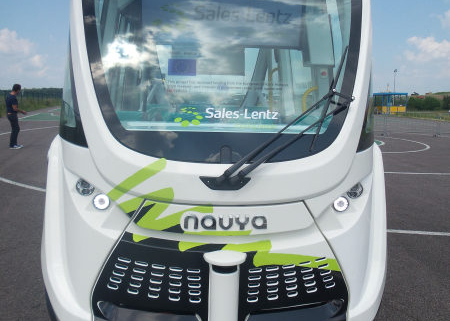