The target of the Sion pilot is to integrate autonomous vehicles in the existing public transport services.

Since June 2016, PostBus operates in Sion one of the world’s first pilot project with autonomous shuttles in a city centre on public roads. In the last 3 years, the SmartShuttle project is continuously developing towards a last mile transportation solution in the centre of Sion. Already in 2018, the complex system includes mixed traffic roads with speed limits at 50km/h, 20km/h and pedestrian zones, where there is no other public transport service available.

By the end of 2018, the track was enlarged and the complexity increased. Today, the SmartShuttle connecting the railway station in Sion with the city centre, crossing two traffic lights (communicating via a V2X protocol) and is driving on a double lane streets with 50 km/h speed limit and two roundabouts.

The SmartShuttle currently operates from Wednesday to Sunday between 7AM and 6PM. The operations are financed by the City of Sion, the Canton of Valais as well as Énergie Sion Région (ESR) a local energy provider. The SmartShuttle project has been launched in 2016 within the innovation ecosystem of the mobility lab (https://www.mobilitylab.ch/fr/), which is a private-public partnership between the City of Sion, the Canton of Valais, the academic partners EPFL, the University of Applied Sciences HES-SO Valais-Wallis and the Swiss Post (which owns 100% of the subsidiary company PostBus). All partners support the further development of autonomous services in transportation. The use of the SmartShuttle for passengers is free.

The goal of the SmartShuttle Sion is the implementation of a fleet of autonomous shuttles in the existing transportation system. The project team is currently working in the areas of:

These topics are under development and will be implemented gradually in the coming years.

As a public transportation provider, PostBus relies on the vehicles from Navya from the French manufacturer Navya (see technical fact sheet in annex). Currently, the service operates with two Navya Arma Shuttles in parallel operation, it is planned to add a third vehicle from the same type in the coming months. The fleet management tool of the Swiss start-up BestMile builds the backbone of the overall system and is on daily operation. The sensitive communication between the shuttles and the infrastructure, is according the highest safety standards and relies on the technology provided from Siemens Mobility

Sion is the capital of the Canton of Valais, boasting a 7,000-year history, and being today the economic center of Valais and an important traffic junction with its own international airport. Within its agglomeration, there live more than 50’000 people. As capital of the canton of Valais, Sion hosts many governmental offices, companies, a university of applied science and the regional hospital. The mountainous Canton of Valais, has an overall population of 340’000 inhabitants and has a very strong tourism sector. Sion’s bus and train stations are the heart of the Valais public transport network, offering different types of urban and regional public transport services.

The long-term goal of the Sion is the full integration of autonomous shuttles into the public transportation system. We see the autonomous shuttles primarily as a last mile application, which completes the existing public transportation system and is offering in addition “on-demand”-mobility.
The replication site will be in Uvrier with an “on-demand-service” in a residential area. (Distance to Sion approx. 5 km).

The set-up of this on-demand zone will include the design and implementation of the on- demand transportation service in general. We will install a dense network with bus stops (every 100 to 150 metres – the vision is to provide “door-to-door” service with flexible stops as soon this is possible from the technical and legal side). We plan the operation with a fleet of three Navya Arma Shuttles.
At the moment we use the BestMile App and the BestMile Control Center (Fleetmanagement and Customer app). We are very interested and will test the AVENUE mobile app that will allow to order a trip.

A special focus will be paid to people with special needs (e.g. elderly people and persons with disabilities). This enables the design and uptake of the two following services:

Furthermore, taking into account the special needs in the design of the service (universal design) ensure that the SmartShuttle is accessible and useable for everybody.

In particular, the following services are part of the new system:

PostBus has a legal authorization by the Swiss Government (Federal Office of Roads ASTRA), to run an autonomous pilot service on the existing track until the end of the 2020. In the role of an operator, PostBus relies on the vehicles from the French manufacturer Navya, the fleet management system of the Swiss start-up BestMile. At a first glance, there is no reason that might restrict the integration to the AVENUE services and platform. 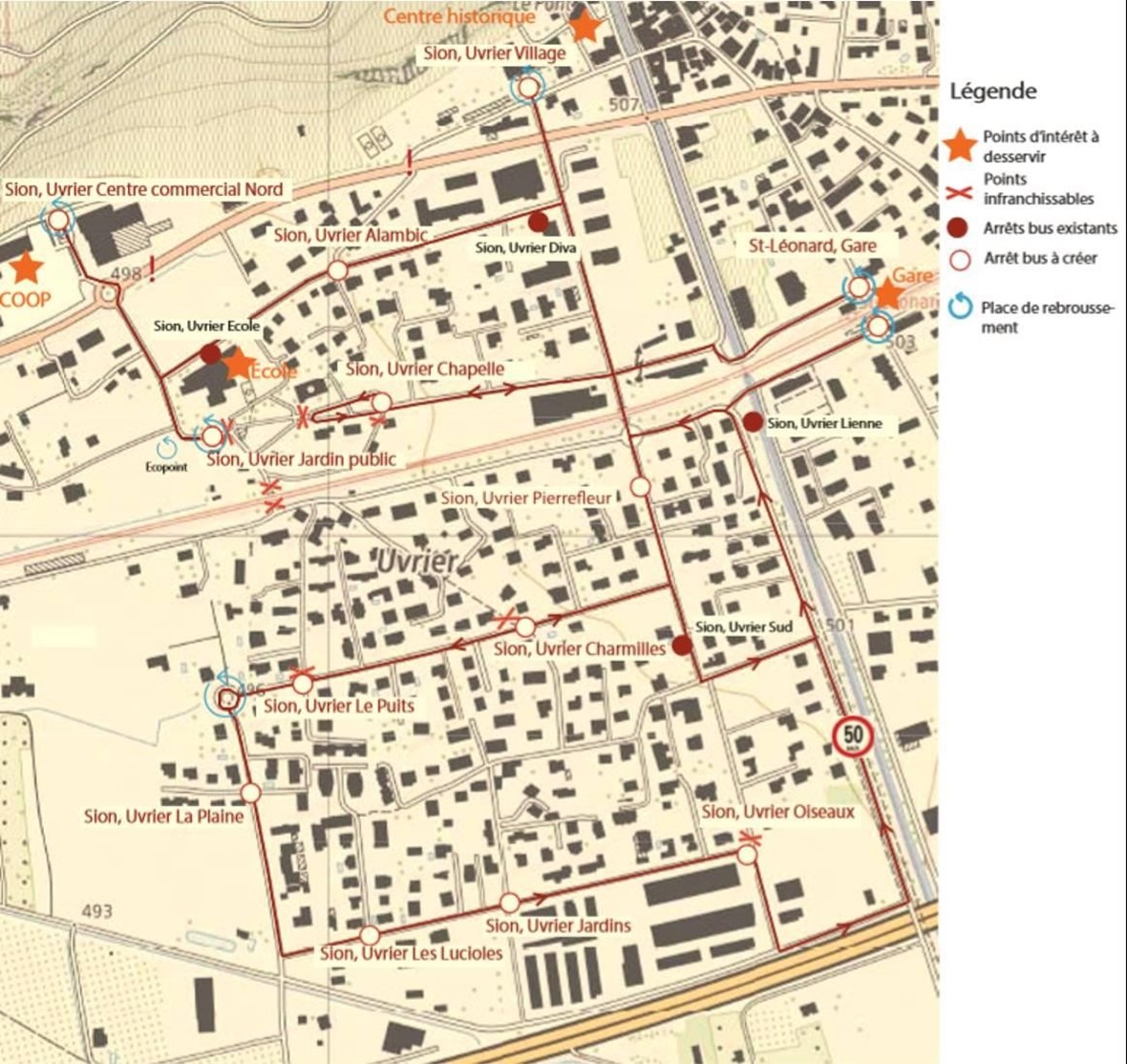 The Uvrier deployment by Carpostal will be a replication of the AVENUE service at Belle-Idee, uptaking: